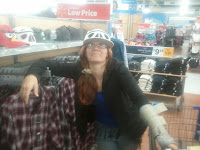 The bad thing about following a fad when it comes to writing has been adequately represented with One Direction fans and their billions of One Direction fan fic stories. But this applies to any fad that comes along.

When many people are excited about reading or writing the current fad, suddenly there are more and more stories with -- yes, you guessed it -- a new twist! The horrid thing about that? Suddenly you have so many ugly, mutated versions of the same characters that all of them begin to overlap and sound the same. It’s kind of like imbreeding, you know? Ew!

It doesn’t matter how many ways you write a One Direction fan fic, it’s still the same: a boy band whose multiple sets of pants girls everywhere want to jump in.  Often, you begin to see stories that not only depict the same thing a million ways, but you begin finding versions of them that morally rape otherwise innocent persons. Did you know you can only drink piss so many times in the desert before there’s nothing left but salt and a couple of other chemicals? You can only drink piss so many times before it gets redundant and you die of dehydration anyway. Not to mention how hard it is on the kidneys.

Also, as a writer who should be developing your skillset and experimenting with new things in order to find and create the next new fad, you begin to dull your ability to write by creathing these fan fictions. You get so lost in stargazing the little “I wanna meet / be them!” fantasy that you forget to map out the damned system and write an actual story with substance and originality! By writing fan fiction, you’re using rules that are already created, rather than making your own, and you are no longer really challenging yourself to create your own characters or worlds. By writing fan fics, you’re beginning to use a crutch with pre-created characters. A paint-by-numbers, if you will.   Most of the time fan fiction characters are not accurate.  They only borrow the faces of the real people they are supposed to represent.

So please, writers, do not utilize an already overused palate whose colors are so mixed you’re using dukey browns and moldy, vomit inducing grey-greens! Create the fad, don’t follow one! Even publishers won’t take something that copies something. They want the unique.

For more posts like this, you may read my tumblr page at: 7bloodfire.tumblr.com

Email ThisBlogThis!Share to TwitterShare to FacebookShare to Pinterest
Labels: Advice

Want to become part of an Indie community where writers and artists support each other and help each other in their journey to publishing? Head over to the 7Bloodfire Art and Story Facebook page.